A proposal to discuss the implementation of the Adaptive Yield Split, which enables liquidity providers to improve deposits’ capital efficiency, into all the existing PYTs. This yield split upgrade will be executed on Tuesday 19th for:

This solution has been designed to facilitate large deposits into PYTs without having a steep impact on Senior/Junior APYs but rather adapting to the current liquidity.

Thanks to AYS, Junior Tranches outperform the underlying yield, no matter how much liquidity is deployed into Senior or Junior. This model also ensures that Senior Tranches receive at least 50% of the underlying APY when there’s a high level of coverage.

It’s important to notice that this improvement brings minimal code changes and the yield split logic is self-contained.

Lido stETH represents 97% of the total value locked in PYTs, thus we analyze the effect of the Adaptive Yield Split upgrade in that market.

The analysis reported below shows the application of the AYS in the current scenario ($11m TVL).

The Junior APY boost would be slightly reduced, but it would always outperform the underlying Lido APY. The Senior APY would be increased by 225%.

The effectiveness of AYS is more clear with larger deposits.

AYS lets Senior LPs deposit their capital and receive a yield that is approximately equal to the Lido native yield, outperforming it if combined with IDLE and LDO rewards.

Please note that LDO incentives to Senior PYT are subject to the DAO2DAO proposal, which follows a TVL threshold-based model. The numbers below are calculated with LDO at $0.66 and IDLE at $0.25. 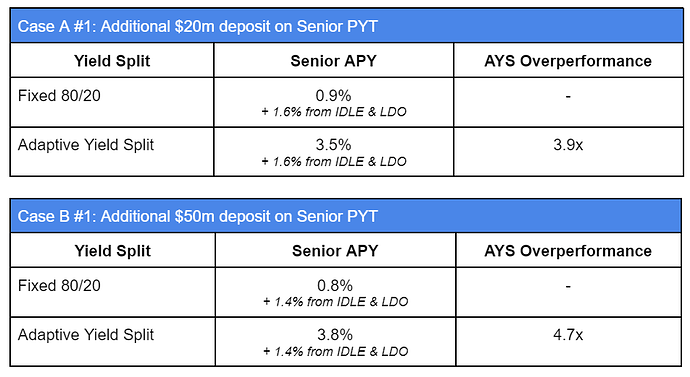 In both $20m and $50m cases, the APY generated by AYS is higher than the theoretical one with the fixed yield split. It is worth mentioning that a $50m deposit is disincentivized today, as the APY would be even lower than Lido’s return. Adaptive Yield Split fixes this limit and unleashes the full potential of risk-adjusted profiles.

We would like to gather the sentiment of Idle DAO and liquidity providers toward the update of the yield split on existing PYTs, passing from a fixed model to a dynamic one.

If no concerns arise in the next 7 days, Leagues will implement the AYS on Lido, Idle Best Yield, and Convex PYTs on Tuesday 19th 2022.

I am fully in favour of this change. The AYS has proven to be a key update to scale the PYTs market.
I think that both current and future LPs can benefit from this change.