A proposal to discuss a change to the $IDLE incentivization emission through the Liquidity Mining program and the Gauges system.

The primary purpose of this proposal is to change the liquidity mining distribution of $IDLE to improve the protocol’s overall capital utilisation efficiency and mining incentive effects.

Liquidity mining is the practice of distributing governance tokens to users that provide capital to a protocol.

The Idle DAO governance token is live since November 26th, 2020 and during the same period, the DAO decided to start a Liquidity Mining program lasting for 2 years (bootstrap program of 1 month and liquidity mining program of 23 months). The LM program currently distributes 18% of the total $IDLE supply (2,340,000 tokens) on a per-block basis across all Idle Best Yield strategies*.

The current LM program is going to end later this year around the end of November 2022. Up today, It has distributed roughly 80% of the $IDLE tokens reserved for this initiative, mainly to three Best Yield stablecoins pools: USDC, DAI and USDT.

We need to answer one key question to better understand the efficacy of the Idle incentivization programs:

To answer this question we should focus on whether the LPs eligible for the $IDLE LM program retain an economic interest in Idle (or do they simply swap the $IDLE they accrue) and if they participate in governance (do they vote on on-chain proposals or do they delegate their voting power).

Inspired by Alex Kroger’s approach, we will focus on the first 100 LP addresses by accrued $IDLE from the Liquidity Mining program/Gauges distribution at block height 15050000, i.e. June 30th, 2022.

Yet very few of these accounts are IDLE hodlers. Only 24% have kept an amount of IDLE greater than 1% and only 17% have kept an IDLE amount greater than 50%. Do recipients of liquidity mining rewards retain an economic interest in the Idle protocol? Seems not.

Being very few of these addresses hodlers, very few then voted. Indeed, only 3 addresses from the top 100 ever voted on an IIP proposal. 7% of the $IDLE holders delegated their voting powers. Do the users who received the majority of IDLE work to shape the future of the protocol? The answer again is negative.

Other than measuring governance participation of IDLE LPs, It can be also strategic to understand the dollar cost, aka the acquisition cost, of the fees generated by the Idle strategies for every $IDLE incentive received. To make the analysis coherent between the incentives distributed through the Liquidity Mining program (BY) and the Gauges system (PYTs), we need to select a shorter timeframe. We considered the entire length of the incentive distribution to PYTs, i.e. mid-April, up to the end of the previous analysis, i.e. end of June 2022.

The Best Yield strategy received around 168k $IDLE incentives (for an average $ value of $117k) and created around $18k in fees for the DAO.

The PYTs strategies received around 75k $IDLE incentives (for an average $ value of $53k) and created around $35k in fees for the DAO.

The results of the governance and the financial analyses demonstrate that Idle’s Liquidity Mining program is not behaving as expected. As a matter of fact, one of the goals of the LM program was to increase governance participation among new token holders. In addition, it seems like the distribution of incentives through the Gauges model can attract more capital than the distribution through the LM program.

We will list four ideas to address the $IDLE’s distribution strategy challenges:

We would like to propose a change to the daily $IDLE distribution rate (currently at ~3200 $IDLE/day) by decreasing it to ~2000 $IDLE/day. This change would affect both the Best Yield strategy (Liquidity Mining program) and the Perpetual Yield Tranches (Gauges distribution) and can be summarized as follows

A distribution of $IDLE incentives through Gauges can better attract new users to the Idle ecosystem. The Gauges mechanism lets the community choose which pool to reward most every week.

The DAO can also leverage the use of Gauges for partnership reasons, increasing the gauge weight of a specific pool together with partners. The most significant example of DAO 2 DAO collaboration in this sense is the strategic partnership with Lido.

The $IDLE gauges incentive distribution to Senior PYTs should end in early October according to the initial timeframe set. We would suggest increasing its length to match the updated Liquidity Mining program duration, i.e. February 2023.

One of the goals of the next mandate will be to fully leverage Voters’ Extractable Value (VEV) potential. We do expect an increase of interest by partners and the community to interact with the Idle Gauge system. There is already a discussion going on for the $IDLE listing on VeToken Finance, while other partners, such as Angle Money, are ready to incentivize manually Idle stakers’ Gauges votes.

In addition, the Gauges mechanism’s nature does promote an increase of $IDLE staking, aligning the interests of new depositors to the ones of long-term IDLE token holders.

Thanks to the Senior PYTs integration into the BY strategy, the reduction in the incentive distributed to the BY wouldn’t affect too much the final return for users.

Idle Finance has always shown APYs on its dashboard split between the underlying return and the incentives one, integrators, on the contrary, show APYs coming from Idle as a sum of the two, i.e. underlying + $IDLE yields.

To hedge partially the consequences of a change of the distribution rate on Idle integrators’ APYs, Idle DAO will start deploying some of the BY funds into the Senior PYTs pools. Besides adding a new yield source, the BY strategy will be able to offer higher yields by leveraging the higher APYs generated by the PYTs underlying, as well as meet the high-security standards of the BY strategy with the built-in protection mechanism of Senior PYTs.

Instead of distributing governance tokens only to liquidity providers, we can share part of the tokens based on Governance contributions in proportion to protocol impact. The underlying assumption here is that contributors, those who put time and effort into the protocol, are much more aligned with the long-term success of the protocol than yield farmers.

Idle DAO has just released a Governance Mining program. In the proposal presented by @emixprime, we set some guidelines to reward contributors with a high impact on the DAO governance.

We would like to gather the sentiment of Idle DAO toward the update of the current $IDLE incentives distribution programs (LM program and Gauges) and the solutions listed to attract new active contributors to the Idle DAO.

We need also to remember that once the current $IDLE incentives programs will end, there will be another fund reserved to foster liquidity provision, i.e. the Long-term Rewards fund.

This post will be open for discussion and in about 5 days, if there are no objections, we will proceed with the Temperature Check.

—
*For a matter of clarity, in this analysis, we are showing daily distribution rates. $IDLE incentives distribution happens instead on a per-block basis, hence some rounding has been applied.

@Biaf , thnx for the update.

We al agree, things need to change.
It was already clear that we did fall back a lot in users and those who hodling from mining etc. 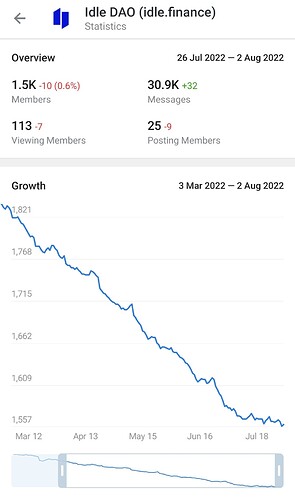 I think the 4 options who mentioned are good selections to choose out.

In my opinion, community growth first, we falling literally behind in this. So if there is more money for initiatives in this, i am happy.
Ofcourse I respect if there are other point of views in this.

Maybe we should look how we did get our first bunch of users, and if that’s possible again.
Not with Andre this time