This IIP follows IIP20, which activated the Gauges, and sets the IDLE distribution rate to 990 IDLE/day.

With its on-chain execution in about 5 days, Idle DAO will complete the production release of Gauges at the full IDLE distribution rate approved by the Governance.

Gauges were deployed earlier in a guarded launch phase, allowing Dev League to test the contracts and customize the UI.
IIP-20, which finalized the IDLE transfer to IdleDistribution contract, did not include the change of the Gauges’ IDLE distribution rate, now set at 10 IDLE/week.
Leagues launch IIP-21 to unlock the full Gauges’ IDLE distribution rate (990 IDLE/day), whose on-chain finalization will be on April 15th.

The code related to this IIP is here.

The off-chain snapshot for stkIDLE holders reached the quorum, and more than 680k IDLE votes were broadcast during the on-chain voting phase! 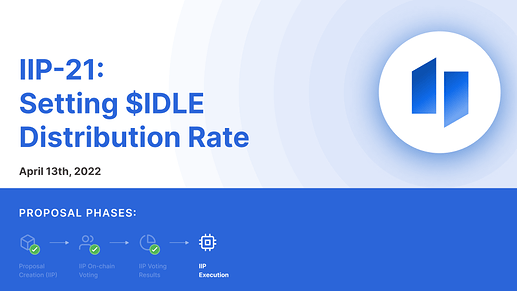