A summary of the events affecting Bancor and the actions taken by the Leagues to minimise the risk of any possible loss of funds. $IDLE liquidity on Bancor has been temporarily withdrawn due to the halt of impermanent loss protection on Bancor v3.

This proposal aims to deploy 187k IDLE from the current Smart treasury (Balancer pool) to the IDLE/BNT pool and earn a yield from that deposit.

At the time of writing, this token deployment could result in ~$900k pool liquidity.

$IDLE token holders will be able to further deploy single-sided liquidity up to ~$600k.

In March 2022, Leagues proposed to double the size of the $IDLE pool on Bancor

With an additional 187k IDLE deposit, Idle DAO can achieve $1m liquidity, thanks to the BNT matching.

These two actions made the Bancor pool the most liquid $IDLE pool in the market with ~55% of the whole DAO tokens there.

The main benefits of the liquidity deployments for Idle DAO were

On June 10th, 2022, the Bancor team told us that the $IDLE pool was ready to be moved to Bancor v3 benefitting from some new features while maintaining the old ones

Once the pool is migrated to Bancor V3, there will be no cap on liquidity deployment from Bancor’s side (infinity pool). No proposals will be needed to increase the liquidity.

We started testing the v3, with the aim to move part of the $IDLE liquidity at first and then bridge fully the pool to the latest version.

On June 20th, 2022, the Bancor team reached us again to tell us that the IL Protection mechanism has been temporarily paused (BIP-21) due to significant position withdrawals that put the system under unprecedented pressure.

As withdrawals have been disabled on v2, the migration to v3 resulted to be the only option to manage the deposited liquidity. The migration would be based on the “fully protected” value of the pool which considers the initial deposits, fees and full coverage from IL.

On June 23rd, 2022, we migrated the IDLE/BNT pool from v2.1 to v3. Trading features on the v3 pool have never been enabled due to this proposal, which was released two weeks after our migration. Hence, $IDLE trades kept on being routed to the v2 market. Basically, the situation was:

LPs were advised to move to v3 in order to manage their liquidity, but at the same time on v3 liquidity is not counted for trading activities nor let new liquidity deployments (both in v2 and v3) once funds are withdrawn. 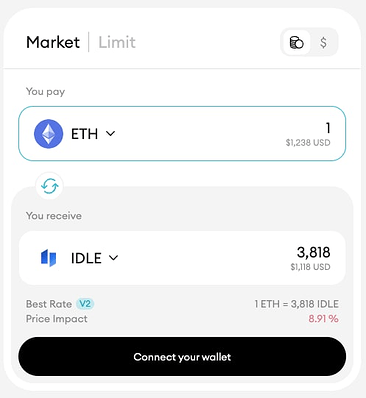 Based on this, we decided to withdraw the $IDLE liquidity from Bancor, which happened on July 7th, 2022, due to precautionary reasons. Both benefits of using Bancor, i.e. IL protection and low slippage, were missing.

No funds were affected by any loss. We deposited 374k $IDLE and redeem ~375k tokens.
$IDLE funds are currently held in the Treasury Leagues multisig together with the funds transferred with IIP-23 for the Idle - Lido D2D initiative. 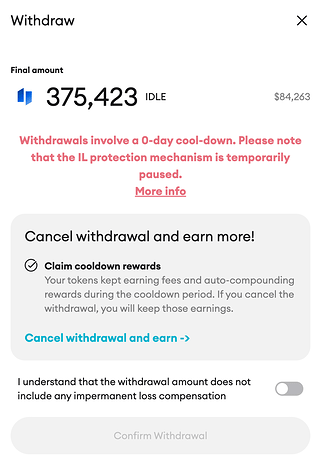 We are currently discussing the possibility to have deposits re-enabled on the IDLE/BNT pool and we will share the Bancor Governance post about it once released.

Our actions were driven by the sole purpose of protecting DAO funds and we aim to deploy back the tokens on the platforms when Bancor will exit the current turbulent situation and enable full features on all the pools.