This IIP finalizes the transfer of 200k IDLE from the Ecosystem Fund to the Treasury League Multisig to activate the stkIDLE delegation and KPI option, as part of the D2D collaboration proposal: Idle <> Lido.

With its on-chain execution in about 5 days, Idle Leagues will stake the received $IDLE for 4 years, delegate the LP reward boost to Lido DAO as an NFT, and deploy the KPI option.

We see this proposal as a good opportunity to value the trust placed by Lido in our PYTs and double down on this collaborative effort for the benefit of both DAOs, communities, and the DeFi ecosystem as a whole. The proposal relies upon three initiatives, each lasting six months:

Currently, the most used methodology of DAO2DAO collaboration is token swaps. A token swap creates an economic relationship between DAOs and lets communities diversify their treasury.
A direct token swap, though, presents one main limitation such as a financial return bound solely to the token price and not to the performance of the collaboration. Historically it has proven poor in aligning incentives between DAOs.

We would like to introduce, instead, a voting power delegation. A delegation of voting power between DAOs through Gauges weights and LP reward boost opens up the doors to a new form of collaboration, by temporarily assigning resources that carry intrinsic financial benefits.

Thanks to this delegation, Idle and Lido will be able to:

The proposal passed and has been queued! 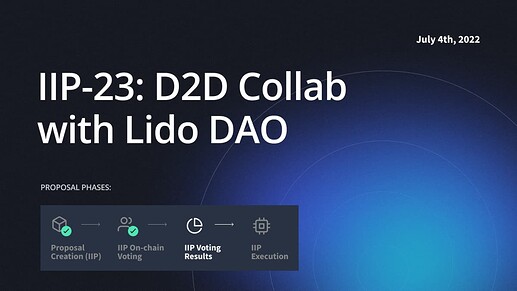