A DAO to DAO proposal to strengthen the partnership between Idle and Lido consisting of three initiatives: stkIDLE delegation, $IDLE KPI option and $LDO reward program.

Lido is one of the top Ethereum protocols and is currently the leading solution for ETH staking in the DeFi space.

The Lido Ethereum Liquid Staking Protocol, built on Ethereum 2.0’s Beacon chain, allows its users to earn staking rewards on the Beacon chain without locking Ether or maintaining staking infrastructure.
Users can deposit Ether to the Lido smart contract and receive stETH tokens in return. The smart contract then stakes tokens with the DAO-picked node operators. Users’ deposited funds are pooled by the DAO, node operators never have direct access to the users’ assets.

1239×284 73.1 KB
Since February 2022, Lido has been a key partner of Idle by supporting our protocol and our new primitive, Perpetual Yield Tranches, to scale and grow with new liquidity providers. We would like to introduce, then, a new DAO to DAO collaboration proposal between Idle DAO and Lido.

We see this proposal as a good opportunity to value the trust placed by Lido in our PYTs and double down on this collaborative effort for the benefit of both DAOs, communities, and the DeFi ecosystem as a whole. The proposal relies upon three initiatives, each lasting six months:

Currently, the most used methodology of DAO2DAO collaboration is token swaps. A token swap creates an economic relationship between DAOs and lets communities diversify their treasury.
A direct token swap, though, presents one main limitation such as a financial return bound solely to the token price and not to the performance of the collaboration. Historically it has proven poor in aligning incentives between DAOs.

We would like to introduce, instead, a voting power delegation. A delegation of voting power between DAOs through Gauges weights and LP reward boost opens up the doors to a new form of collaboration, by temporarily assigning resources that carry intrinsic financial benefits.

Thanks to this delegation, Idle and Lido will be able to:

Besides the stkIDLE delegation and the $IDLE KPI option, the six-month $LDO reward program will let long-term liquidity providers plan in advance their liquidity deployments into stETH-based PYTs without worrying about the duration of the incentives program.

The DAO to DAO collaboration proposal consists of three initiatives

This new delegation approach is a smart way to grant exposure to the Idle governance decisions as well as Gauge boosting upside, without losing the ownership of Idle DAO treasury assets. The off-chain snapshot voting power will be delegated to an address managed by Lido DAO. The Gauge voting power will pass through the Treasury League multisignature, which will stake the tokens. The LP reward boost will be granted in form of transferrable NFT (available via Gauges V4).

The delegation process can be summarized as follows:

Idle DAO will lock 100,000 (extra) $IDLE in a UMA KPI option. Lido will be rewarded conditional to the following TVL milestones reached on the stETH-based PYTs 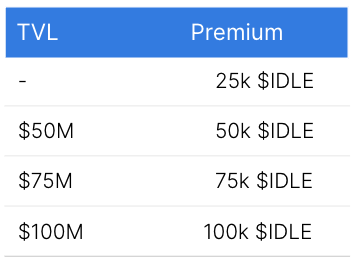 We already agreed with the UMA team to receive support for the KPI option setup, if Idle DAO will be in favour of this proposal. The $IDLE tokens will be locked for 6 months and will be redeemable at the expiry of the option. The number of unlocked tokens will correspond to the threshold reached before the KPI option expiry, calculated as the average TVL on stETH-based PYTs over the last 3 months of the option duration.

Lido will incentivize stETH-based PYTs with $LDO rewards following the below TVL threshold-based model. The transfer will be on a monthly basis and the exchange rate will be the 30-day $LDO TWAP. 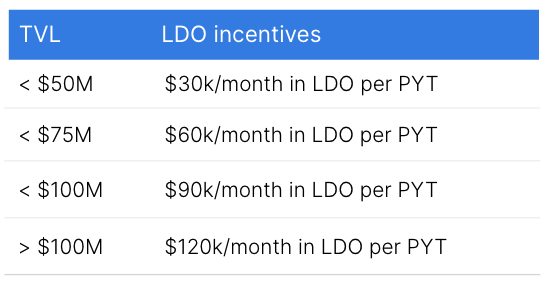 Lido rewards committee can directly handle the first tier of LDO incentives ($30k/month). The source of the LDO incentives related to higher tiers will be discussed along with the Lido team once the TVL metrics will be reached.

We would like to gather the sentiment of Idle DAO toward these initiatives. In particular, the Idle DAO will be asked to vote on the 1st and the 2nd initiative concerning $IDLE tokens from the Idle DAO treasury.

This post will be open for discussions and in about 3 days, if there are no objections, we will proceed with the Temperature Check.

Fantastic proposal and really excited to see this D2D collab happening – needless to say I’m in favour of it!

This proposal represents a great opportunity to build a long-term and solid relationship with a player focused on capital efficiency improvement for ETH staking.

With the rising interest in Ethereum in sight of the Merge, this proposal amplifies Lido and Idle’s efforts to onboard new liquidity partners and improve the offering to their individual needs.

The voting power delegation is a simple and innovative approach to aligning the interests of the involved parties.
Using existing technologies like Gauges v4 and snapshot delegation, this proposal adapts these tools to design a DAO2DAO collaboration.
DeFi is an always-experimenting industry, and I’m glad to see this model applied in this unique context.

Kudos to the Lido Rewards Committee for the mind’s openness and for making this happen! 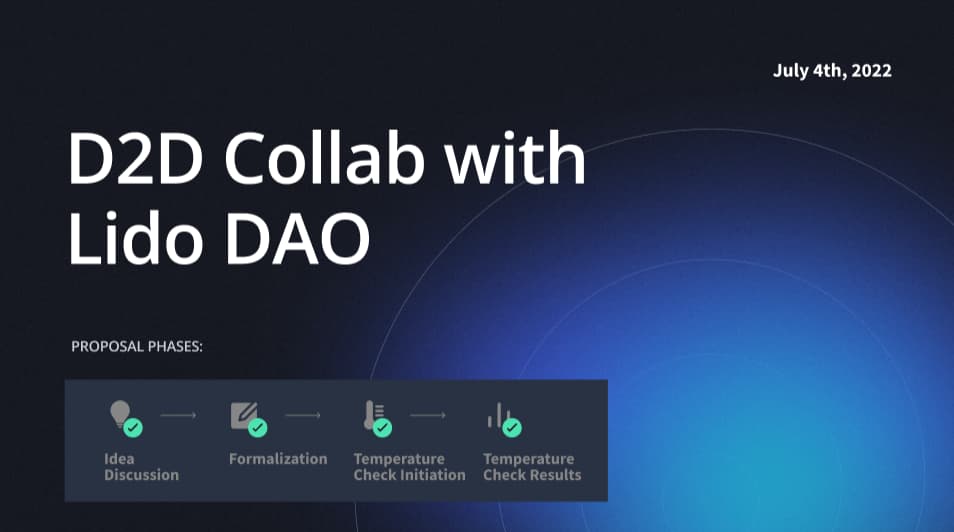 I’m a contributor at Lido and wanted to engage here in order to mention that this collaboration was put into effect on our side too and has been going well.

It’s also a good base model for DAO2DAO contributions in general imo.

Also, that we’re excited to start using the delegation to engage in Idle’s governance going forward

welcome onboard! Happy to see you here and good to know Lido’s interest to be more involved in our governance.