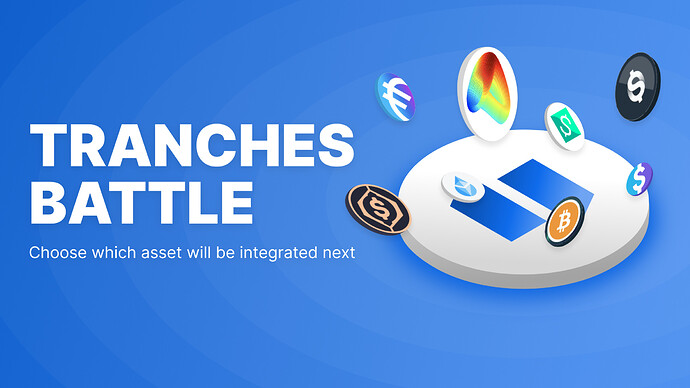 Idle Leagues designed a listing tournament for $IDLE holders to select the next assets that will be integrated into Idle PYT, using Convex as the underlying yield source.

All the assets listed on Convex will be eligible for the integration, and 5 winners will be selected through playoff & final rounds!

This initiative aims to expand the current PYTs suite with 5 new products, allowing users to choose their preferred yield exposure among a wider range of strategies.

How it works
There are currently 63 assets listed on Convex. Excluding MIM and FRAX, as their tranches are already live, there are 61 assets potentially listed on Idle via Convex PYT.

Pools are divided into 3 snapshots, each with 20 assets → 60 (+1) potential integrations.
The initial phase represents the playoff, where the top5 most voted assets for each snapshot will be elected to go to the grand final. At the end of the playoff season, token holders will select 15 assets.

Then, the top5 most voted assets during the finals (out of 15 candidates) will win the contest and get their Perpetual Yield Tranches live and running. 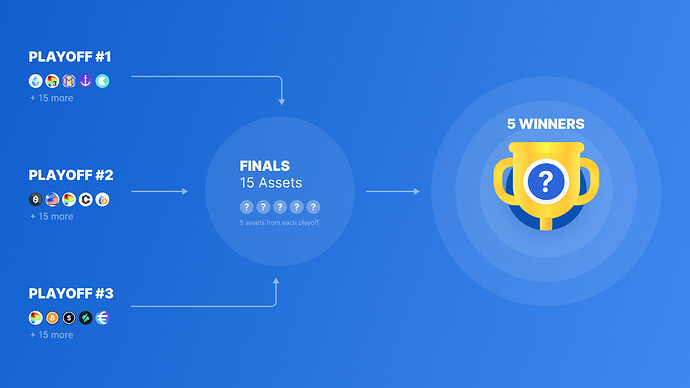 Snapshot criteria
Each snapshot will list 10 Convex assets from the highest to lowest TVL and 10 starting from the bottom, from lowest to highest TVL. In this way, we avoid having only top pools concentrated in one snapshot, generating more heterogeneous lists.

Assets are ranked according to the TVL displayed by Convex on January 13th 2022. 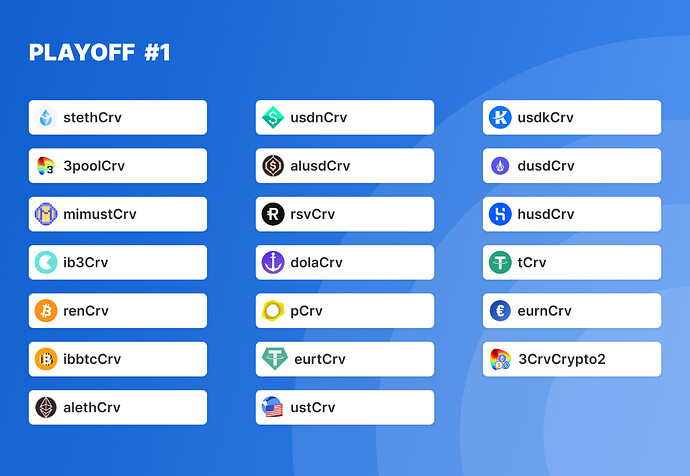 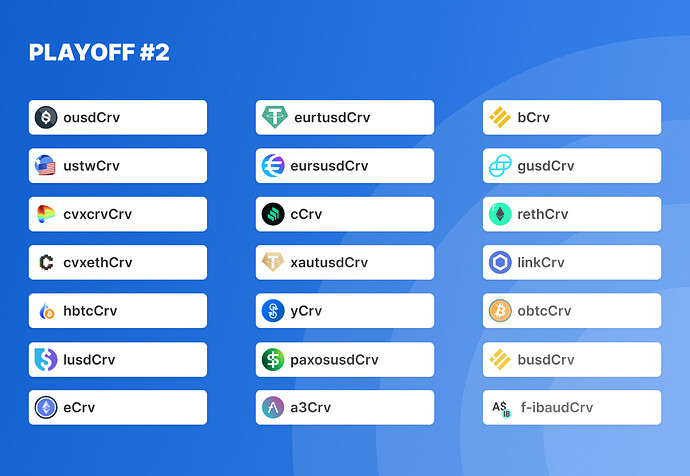 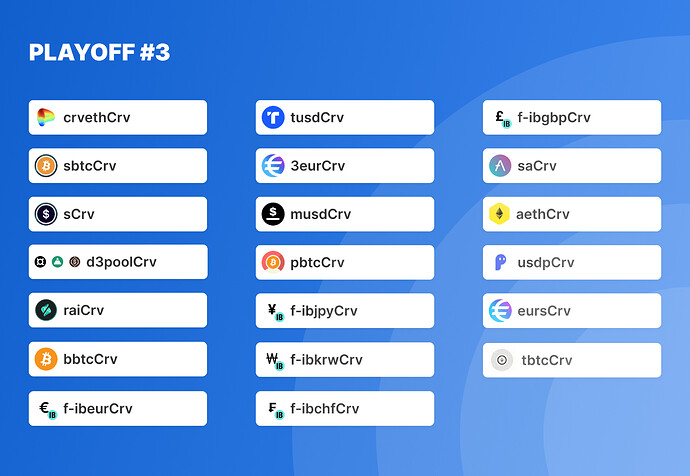 Both $IDLE token holders and $stkIDLE holders (community members that staked their $IDLE) will be able to vote these snapshots. Poll results will be the combination of $IDLE + $stkIDLE votes, using our approved calculator.

During playoffs, all three snapshots will be live at the same time, ending after one week of voting phase.

The estimated Mainnet release will be approximately 2-3 weeks after the winners’ announcement.

Benefits for winning communities
The product provides an additional gateway to provide liquidity into Curve and Convex, reducing slippage and improving the resilience against asset fluctuation.

With Perpetual Yield Tranches, LPs can earn a higher share of yield by taking a higher percentage of risk (with Junior Tranche), or they can hedge the risk by depositing their assets into a built-in protected tranche (with Senior Tranche).

For example, several Senior PYTs are now competing to get listed on APWine.
APWine allows users to speculate on the evolution of the generated yield. With Senior PYT listed on this protocol, you can hedge your risk on your passive revenue and sell unrealized gains, or trade the underlying asset to have full exposure on future yields.
At the same time, there would be 2 new on-top gateways to onboard additional liquidity into the listed asset.

Foster a D2D collaboration with Idle DAO
If you are involved in a DAO featured here as one of the listed tokens, you can increase the chances to get your pool voted by illustrating to our community how Idle DAO can benefit by listing your asset.

Eventual DAO2DAO proposals will be examined in depth by our Governance!

hey folks, nice to see a good proposal like this.
oBTC is wrapped bitcoin through BoringDAO tunnel, now you can farm oBTC pool on Yearn, Badger and Convex. It would be great if idle can intergate oBTC.
welcome to vote for the oBTC pool, and free to ask me anything about oBTC or the oBTC pool or BoringDAO itself.

Hey all, Derrick from Liquity. We’d love to see LUSDCrv get integrated

Hi,
Théo from mStable here
We would love to see mUSDcrv integrated here in these Playoff 3.

As mStable Save is about to enter Idle existing the tranches product, leveraging mUSD utility with mUSDcrv would create a very interesting flywheel within the Idle Product line
More generally, we would love to partner with the team on new original product ideas like this
Happy to answer questions

Then, the top5 most voted assets during the finals (out of 15 candidates) will win the contest and get their Perpetual Yield Tranches live and running .

This is an amazing initiative and I would like to congratulate the Idle Leagues for the exciting collaboration with all the other DAOs.

One thing I would like to add to the conversation is the possibility to allocate some $IDLE rewards to the 5 winning assets IF the Leagues manage to do it in a way that does NOT add to more inflation of the supply than we currently have.

Hey everyone! Pablo from Angle Protocol here! Really love the idea of the contest!
And would love to see our 3EUR pool pass the first round!
Let’s put some Euros there!

Josh from Origin Protocol here! Excited for this contest. I’d love to see the OUSD pool integrated. We’ll spread the word to our community.

pBTC is wrapped Bitcoin on Ethereum, Layer2s (Polygon, Arbitrum, xDAI/Gnosis and counting), BSC and other blockchains via pNetwork. It is available across major platforms including Curve, Uniswap and Quickswap among others. It would be great to see pBTC on Idle as well!
If you are not familiar with it, pNetwork is a multi-chain routing protocol for assets, NFTs and data. The protocol connects 12 different blockchain ecosystems, it is integrated as a DeFi-onramp with major exchanges including Binance, Bitfinex and Kucoin and has processed $1 Billion in cross-chain transactions.

One day to Playoff closing! 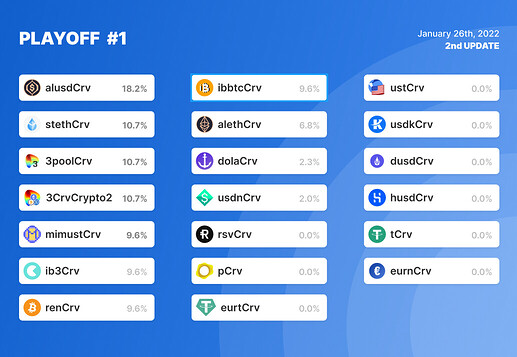 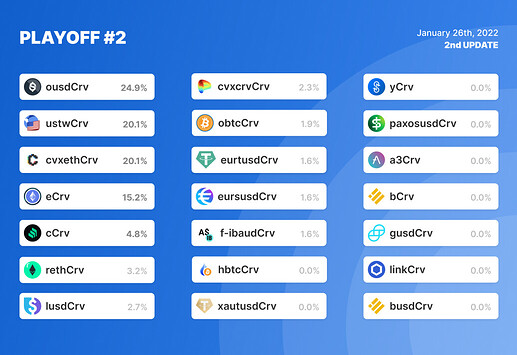 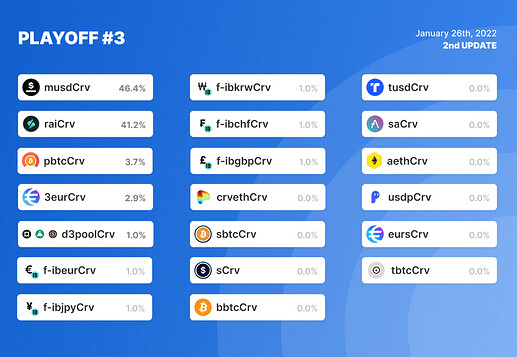 Communication: to give winning communities room to organize potential engagement activities and let Idle voters get familiar with finalists, Finals will start on Monday 31st instead of Thursday 27th

The results are in, congrats to the 15 finalists!

The Finals will start Jan 31st (next Monday)

Winners are highlighted in the images below 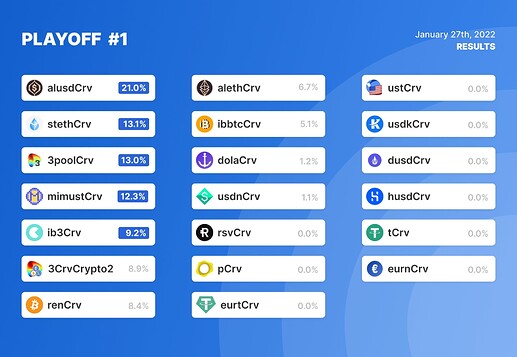 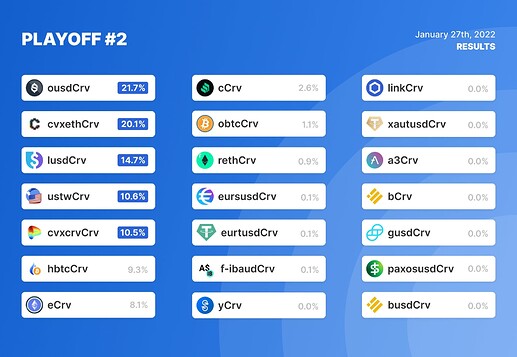 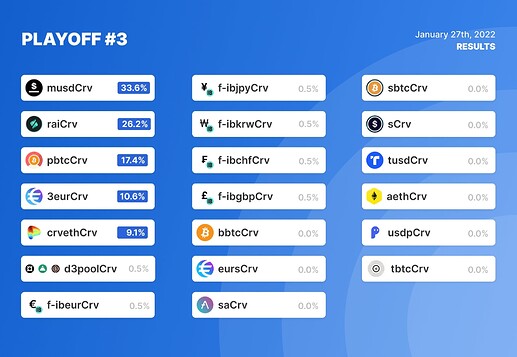 IDLE token holders selected 15 assets out of 61 candidates during the playoff season.

We are now at the Finals!

Top5 most voted assets (out of 15 candidates) will win the contest and get integrated into PYTs! 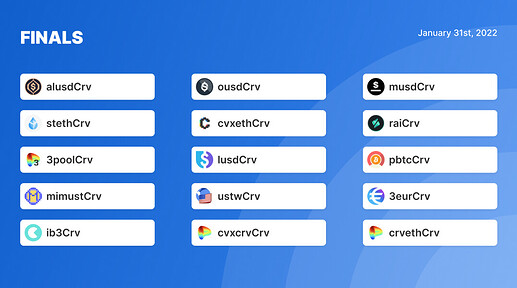 Just communicated about this 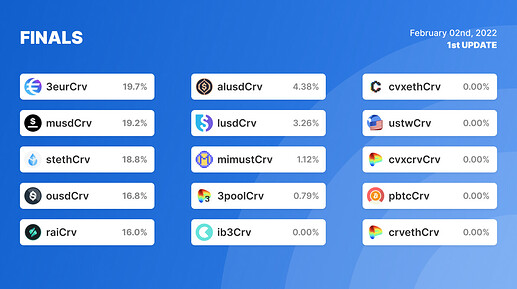 Hello!
Alchemix just launched a proposal to purchase up to 20k DAI worth of IDLE and use it to direct gauge rewards to the alUSD tranches should alUSD place in the top 5: Snapshot

Would love to see alUSD make it in!

Hey everyone!
pNetwork has announced a $ 20,000 worth extra IDLE rewards for the pbtcCrv Senior Tranche coming your way if pBTC is added.

Great to see @alicecorsini , I’m sure the Community will recognise this move in their voting preferences